skip to main | skip to sidebar

Kiss a frog.....
Originally uploaded by rebekahlynn5.
find out what happens in Colorado!!! I posted some new pics...finally! We just got back from Colorado. Donald's brother David is being deployed so he wanted to do one last get together before he left. We had an amazing time! We went intertubing, snowshoeing, snowboarding, and snowmobiling! I was so excited to go snowmobiling becuase my parents used to always go when I was a kid. It was a BLAST!!! We had so much fun! It was a true vacation!! All the boys want to do it again, and now Donald is hooked on snowboarding...another incentive to move to WA!!!

Then we stopped in WA for my mom's wedding (also pics on flickr). It turned out really well...fire alarm's and all.

Anyhoo, I better get to work! I love you all!!! Oh, one last thing, Donald is leaving for Maui for a MONTH!! I'm not very excited, but is work is sending him...so please pray for both of us during this time.
Posted by Rebekah at 9:18 AM 2 comments:

Yes, I know, I'm a slacker. I haven't posted anything for 2000 years!!! We don't have internet at my house and so...you know the rest. Anyways! I'm married now and doin the whole wifey thing. Pretty weird sometimes, but mostly great! We had an amazing wedding that we were definantly blessed with. So many people helping and blessed to have so much family come over to Hawaii. We had a blast! Then we went to the Big Island for our honeymoon. It was amazing!! Then to Washington and had another reception (with awesome help from our friend Kat) it was so great and had awesome weather! Then I took him around the state from Bellingham to Westport and across the Mountain. We had tons of fun.

So, anyhoo, now I am currently working at my church as the office administrator. I love it. I love doing office stuff, but, sadly it's going to end soon. It was just a temporary job. So, we'll see what God has in store for me next.

Well, I just wanted everyone to know I was still alive...one of these days I'll post more pictures. (But, I've also lost my cord for my camera in my many, many, many, moves within the past year.) Well, I gotta get back to work. I love you all and I'll try to be a little more updated!!
Posted by Rebekah at 1:08 PM 2 comments:

Spending the night in the Kurdish village

Spending the night in the Kurdish village
Originally uploaded by rebekahlynn5.
On Friday night, three of us got to spend the night with a family in the Kurdish village. Tanya, the contact that we've been working with at the Kurdish village, is friends with this family. She's like a sister and daughter to them. So, they invited us to spend the night with them. It was so much fun! We didn't understand anything that they were saying. But, we were still able to converse with them. It was so much fun!!!!! We came in and the mom was making dinner and we ate dinner with them. We watched one of the girls do her prayer thing, very interesting. Then they put pagminas on us. One of the girls wanted to braid my hair so she did and I braided her hair. They wanted each of us to sleep with one of them. So, this is the girl that I slept with. And they really like to cuddle!!! When we woke up in the morning Tanya went with one of the girls to work. So we were there by ourselves, with no way of communication. Finally after the younger girls woke up they gave us breakfast. Then they took us to the bus stop. While we were waiting, I noticed a man walking a sheep up the hill and I pointed it out to the girls. Then we saw him bind his feet and flip him on his back. We were wondering if they were going to kill it right there on the street. Our questions were answered when we saw him pull out a knife and slit it's neck. They let the blood drain and then completely beheaded it. It was so gross!!!! I couldn't believe they were just doing that on the street with the blood running down. I won't put the pictures on the blog, but if you want to see them when I come home, they're pretty cool!
So anyways that was our experience with spending the night in the Kurdish village. It was a great experience and so much fun! The girls were so cool and it was lots of fun trying to converse with them. We also only had a squatty with no toilet paper. Luckily I had brought a small roll with me just in case!
We are now done in the Kurdish village and our ministry in Izmir. We are now in Solcek, where Ephesus is. It's amazing here. And I can't wait to tell you all about it!
Posted by Rebekah at 11:06 AM 5 comments:

Everyone was sad about being away at Christmas. But it all ended up fine. Let's see, Friday night (the 23rd) a few of us went to an English Club/internet café that's run by Christians. Originally we thought they wanted us to do some kind of Hawaiian Christmas thing. So, Chaz and I were trying to figure out a song to make a hgula to. Well, we finally found out that they wanted us to perform some kind of Christmas manger scene reinactment. So I was Mary, Nate was Joseph, Casey was the angel, and Chaz and Breanna were shepherds. It was a little weird, but it worked out, I think. And the power went out so we did it by candlelight. But that gave it a good effect.
So, the next day (Christmas Eve), a few of us went to a Russian church. They wanted two people to be clowns, two to watch kids, and two to help with hospitality (Me and Jessie). So we got there, not really knowing what was going on, as usual. Jessie and I had no clue what we were doing. Pretty much all she did was cut out some papers, and I cut up three loaves of bread. Yes, we felt useful. Apparently it was some kind of passing out presents from Santa for the kids. And in Russian tradition Santa has a granddaughter called the Snow Girl, who helps Santa. So, that was interesting. But it was a fun experience.
So after that we went home and cooked a yummy Christmas dinner. A turkey, that the store coked with rice instead of stuffing, mashed potatoes, corn, bread, cranberry sauce, and Coke. It was great!!! We had drawn names earlier and so we had our gift exchange that night. Chaz had my name and gave me the coolest tea set ever! (Here they drink tea after every meal). Then Chaz made a yummy chocolate dessert. It was a great Christmas Eve.
We woke up Christmas morning with Chaz and Casey having filled our stockings and presents uder our Christmas tree from our families back home. It was such a great surprise! Chaz and Casey made us chocolate chip pancakes for breakfast. Then we opened our presents. Later, we went to Kipa, a mall close by, and ate McDonald's for lunch. Then we went bowling and had pizza and Coke for dinner.
It was sad being away for Christmas, but it was a great way to spent it. Chaz and Casey did a great job at making us feel like we were home!!!

OK, this will be quick because İ didnt prepare what İ was going to write.
The book of Revelation is a letter from Paul written to the seven churches of Asia. OK, so did you know that these places are all in Turkey? Crazy!! And the church in Smyrna, ok well thats İzmir now. OH my gosh! We are living in a place in the Bible! Yesterday we went to the ruins of Smyrna. İll put up pictures as soon as possible. İts insane! İ cant believe it. İve always wanted to be in places that the Bible was, and now İ am. CRAZY!!!! And at the end of January we are going to Ephesus! İ cant wait! This is amazing, just chillin on the Medıterrarean Sea!!!!!! Eating the most amazing olives and feta cheese!! My dad is so jealous right now!!!
İ love you all. Thats it for now.
Posted by Rebekah at 5:49 AM 1 comment: 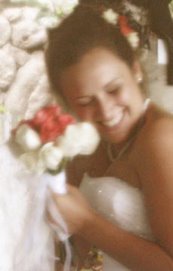 This is a pic my friend took on our wedding day!

Rebekah
I moved to Hawaii to become a teacher. Taught for a year, then decided to join YWAM to do a Discipleship Training School. After doing my outreach in Turkey for 2 months I married the North Shore local boy that I never would have thought I'd ever meet! Now, I'm working for my church as the administrative assistant, wondering what's gonna happen next after this job ends.